TRAVELLING AROUND THE WORLD
Voyages - diaporama

Click on the flag to acces the posts about :

ASIA
Please note that Tibet, Yunnan and Xinjiang are not independant countries but provinces or autonomous regions of China being a bit ethno-culturally different from the rest of PR China. NORTH AMERICA EUROPE

(some locations are still to be completed on this blog : China and Norway ) 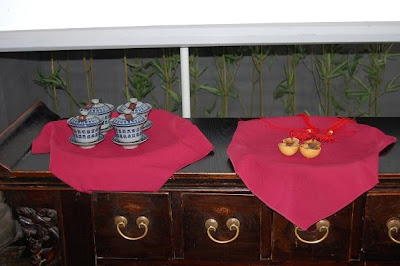 The 4 tea pots and the 2 halves of the fruit in wich we drink alcohol. 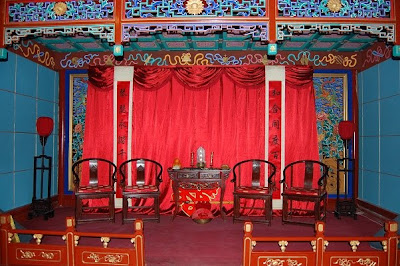 The stage and the altar. 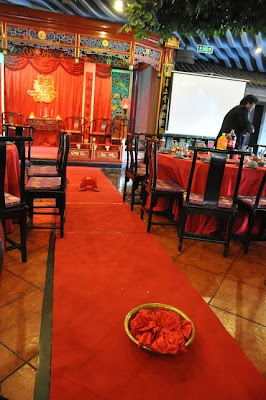 The purifying fire, and behind the apple and the saddle. 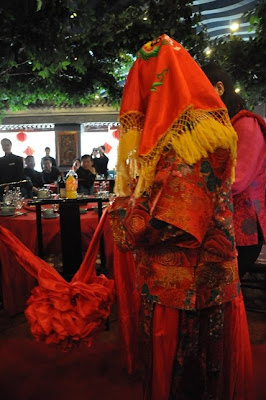 The bride, her veil and the string linking us through generations. 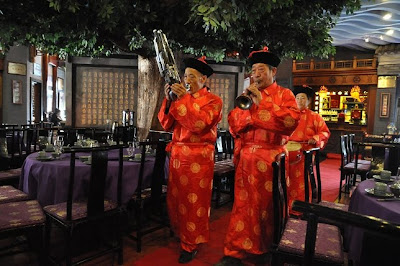 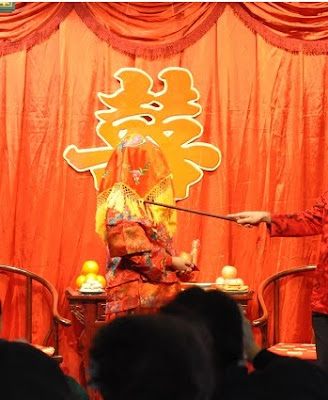 Lifting up the veil for the first time.

What is going to follow is not the complete traditionnal ceremony, but what I experienced, due to circumstances. My familly was unable to attend the ceremony, due t the heavy snow in London and many cancelled flights. I wasn't supposed to live in my chinese familly flats : I was supposed to kidnap the bride. As well it wasn't convenient to ride a horse in Beijing.

Everything began by us staing in a private room. My mother in law fed me with tho rice balls stuffed with sweet sesame seeds. Good but hard to chew. By being well treated by her, I'm suppose to take a good care of my wife. Then she feeds her for the last time before she "leaves" the familly.

A red veil is now put on her head (in ancient times, the couple had never met beore teh wedding). We grab a red rope, symbol of what links us through different lives. I guide my wife to the stage by walking ahead on her left.


The bride has to walk over a fire, supposed to purify her from the evil. Here, the fire was replaced by a red piece of something.


On the way to the stage, we now meet an apple put on a saddle. Apple being said " pingguo" and saddle "ma an", "pingan" means "safe". Depending on the right or left foot chosed to kick the apple, we shall have either a son or a daughter. My wife having forgotten at the last time wich one was what, we're supposed to have a daughter.


We now face the guests; I still stand on the left of my wife.


The host gives me a stick used in the ancient time to weigh the goods on the markets. Their must be another metaphor on the pronouciation, but I forgot it. I use it to lift up the left corner of the veil to try to see her face "for the first time". The the right corner. At the third try, I'm allowed to take it all off. Still without touching her.


We then turn to the altar. My mum was supposed to light three encense sticks and to give them to the bride, but I finally had to do it. Being the future origin of the familly, my wife bows to the altar and place the three sticks on it.


If the candle holder hadn't decided to keep on falling on the curtains, we would have lit a phoenix and a dragon candle.


At that time, our parents get on stage and the maid brings the 4 pots of tea. We have to give one of each to our parents in law, and call them "baba" and "mama" (dad and mum). Then we do another three bows to our parents.


Instead of providing the tea to my parents, a video of them on a large screen is shown. The recorded it in the snow, but the laptop had troubles at playing it. The host explained the problem by the bad weather disturbing the live transmission through satelites. Nobody notied it shuould have been night in france, at that time.


We have to go on our knees for the third time. We bow to each to other, touch our heads on the first bow, and keep the position a long time on the third one.


Now we have to drink alcohol in the two halves of the shell of a dry fruit. After exchanging our halves three time, we tie to the two halves together with a red string. Meaning easy to understand, I guess.


The host now shows a date and a chestnut and asks my wife to name it. In mandarin, their name sound like "early" and "give birth".


I'm then shown a peanut and have to name it. Husheng sounds like "several kids".


I have now to hold 7 dumplings to my wife, tied to a small string. She has to eat and reply to the question "sheng bu sheng" (is that cooked?). She has to reply "cooked". Probably another metaphor about birth, by i've lost my note about it.


That's then my shot to eat something held by my wife. To the question "xian bu xian" (salty or not?) a (small) pronouciation mistake makes me say "stinky"; Everybody laughed out loud. Except me and a few other foreigners who didn't udnerstand ebfore hours what i said.


We then turn again to face the guests and bow to them before we leave the stage. We still hold this red string linking us.


While our guests are all eating lunch, we change our clothes and come back to thank all of them, one by one, by giving them sweets, alcohol or cigarette. In exchange we receive our wedding presents.
Publié par Unknown à 06:31